Posted on January 18, 2016 by kellymarietheartist

Excerpts and sketches from the Medieval Bestiary

Continuing with the adrawingaday project, I have spent a bit of time recently reading about marginalia. From this I was directed to the Medieval Bestiary.

The Medieval Bestiary site is a great resource of strange animals found within the pages of history, as well as many inaccuracies about animals that do exist, and continue to exist today.

Definitely worth a visit to the gallery section, to see the way animals have been drawn through the ages. As an example, the pink winged creature is possibly an early interpretation of a crocodile?

The Medieval Bestiary series for #adrawingaday

I chose both real and mythological animals, and I only really scratched the surface of what is available.

Some of the creatures I chose like the Amphisbaena can be found today as a member of the worm lizard family Amphisbaenidae. Originally, the Amphisbaena was a fantastical, venomous two-headed snake.

Other creatures are more recognisable, like the bee. Not a mundane creature in modern times, but in the eyes of Pliny the Elder or Isidore of Seville, the bee has a fantastical, didactic parallel life comparable to humans.

I have some included excepts from the Medieval Bestiary descriptions of the animals, as well as links directly to the pages.

Overall, I found these sketches were a good little mini-project within the greater #adrawingaday artist project.

Bees are the smallest of birds. They are born from the bodies of oxen, or from the decaying flesh of slaughtered calves; worms form in the flesh and then turn into bees. Bees live in community, choose the most noble among them as king, have wars, and make honey. Their laws are based on custom, but the king does not enforce the law; rather the lawbreakers punish themselves by stinging themselves to death.

The amphisbaena has a twin head, that is one at the tail-end as well, as though it were not enough for poison to be poured out of one mouth. 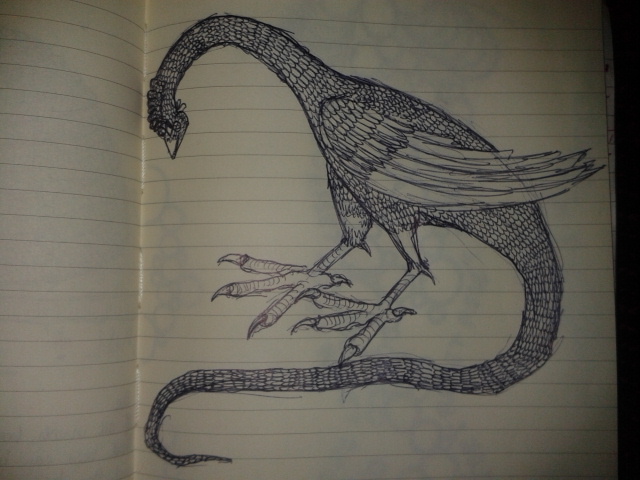 Its touch and even its breath scorch grass, kill bushes and burst rocks. Its poison is so deadly that once when a man on a horse speared a basilisk, the venom travelled up the spear and killed not only the man, but also the horse.

The Cerastes has four horns, which it displays as bait, and instantly kills the animals it attracts. It covers itself with sand, leaving exposed only the part with which it catches allured birds and animals. It is so flexible that it seems to have no spine. 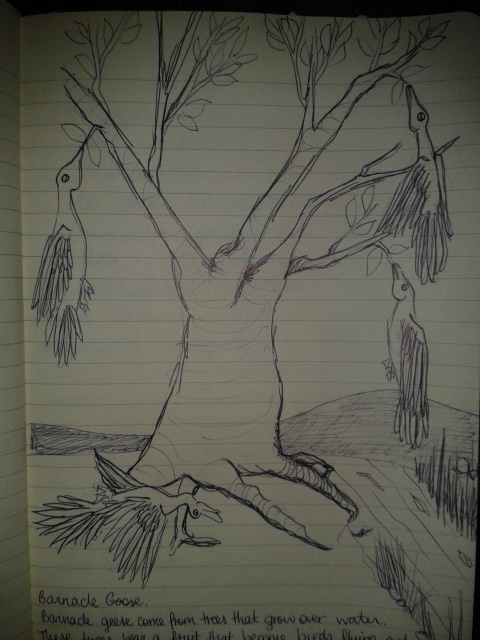 Barnacle geese come from trees that grow over water. These trees produce birds that look like small geese; the young birds hang from their beaks from the trees. When the birds are mature enough, they fall from the trees; any that fall into the water float and are safe, but those that fall on land die. 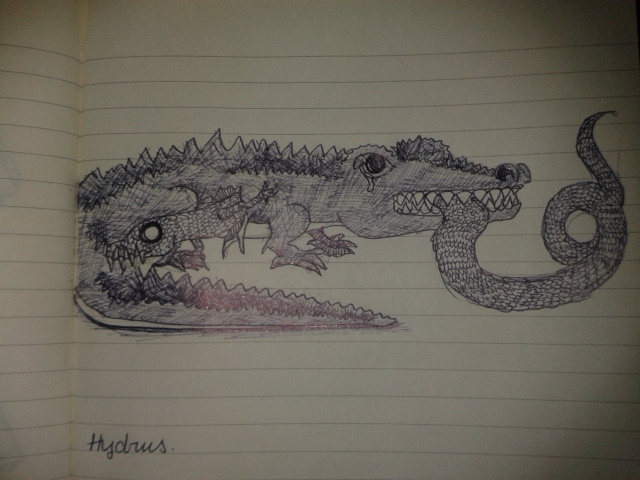 The hydrus is an animal that lives in the Nile River. It is the enemy of the crocodile. When it sees a crocodile sleeping with its mouth open, the hydrus first rolls in mud to make itself slippery, then enters the crocodile’s mouth and is swallowed. It then eats its way out of the crocodile’s belly, killing it.

Everything from the #adrawingaday series is now archived here. Also, Instagram, which also has a bit more crochet of late.

Or find it here: https://kellymariemcewan.com/category/adrawingaday/