Posted on November 19, 2013 by kellymarietheartist

Clothing alterations by a crocheter

I am certain my clothing alteration techniques are not recommended by anyone who can properly sew. ‘Properly’ as in, taking a pattern, some thread, material and a sewing machine, and combining those four elements to successfully make clothing.

As my onesie requires some slight alterations, I have been working on that using crochet attachments.

My foot has recently taken to looking like this: 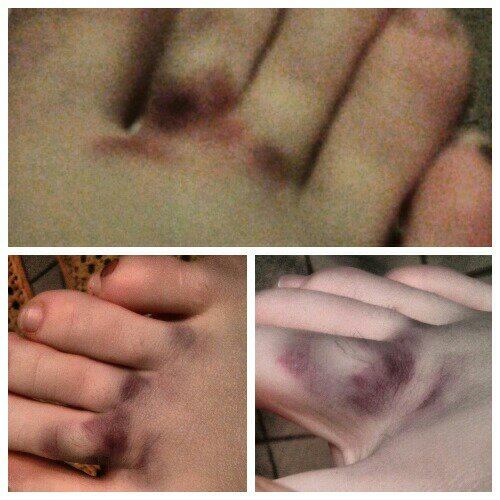 So I have been resting it up over the last few days, and working on that onesie.

Here are a few work-in-progress shots, compilations via Muzy, as usual…

The clothing alterations process so far:

1. Remove all velcro from the bum flap, save for a future repair job.
2. Purchase a crappy pair of pants with buttons from an opshop for $1, ignore stares, remove buttons, discard pants.

3. Sew a line of chain stitch along the top of the flap’s opening, this is the start point for crocheting extra material on (similar to a starting chain stitch for a scarf or blanket).

4. Crochet an extra piece – I chose a rainbow and hearts Fair Isle pattern, because what else was I doing? Nothing? Might as well do something unusual and mildly complicated!
5. Attach two crochet pieces (with buttonholes) on the flappy part of the bum flap.

6. Work out where the buttons should go, sew on buttons. I have resewn two buttons on FIVE times so far, because I failed to plan them out properly, two and a half times.
7. Time to model!

1 Response to Clothing alterations by Kelly-Marie