Posted on March 20, 2011 by kellymarietheartist 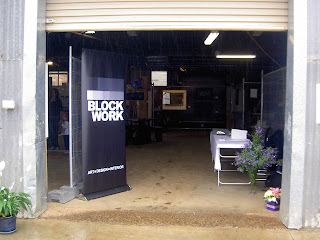 I was fortunate enough to be invited to exhibit in the now-finished Blockwork Art and Design Exhibition. Sally Johnston is the curator of these quarterly pop-up exhibitions, which alternate in theme between Visual Arts and Design & Photography. They are held in several places in Toowoomba, often at the Johnston Kitchens Joinery Shed which is, well, a joinery shed.

I wondered how it was going to work, and was surprised at how well it did. I think the ties between form and function within many of the works themselves helped give them context within a functional, business-only area such as an industrial shed. I feel it was particularly suited to artists such as Geoffrey Allen, who focuses on building in the small scale and mathematical perfection within his works and Rodney Coutts, who submitted exceptionally beautiful pieces of bush furniture.

The opening was classy, too. I got to talk about art, eat canapes, be stared at, and play my favourite game: Who’s Touching My Work?  I think the low setting stopped a lot of people from touching, but, setting Fairy-ring 1 about a foot above the ground perfectly facilitates childrens’ access to the work. That’s OK though. It’s mostly child and animal-proof, they all looked pretty adorable playing with it, and I pretended that they didn’t have feral, snotty little hands.

To a certain extent, I think that the textile works such as Fairy-ring 1 were a discordant note in the exhibition, as the setting of the gallery, an industrial shed, was so very masculine. The saving grace is the use of rugs and quilts outside of the gallery. Their historical functional context prevented them from appearing totally dissimilar. Also, their femininity was then a balance for the smell of wood varnish and sawdust, the drills and half-completed counters.
﻿
﻿﻿
﻿
That night, I also attended Made Creative Space‘s Exhibition 3. The event was costumed, and I did not bring my camera. Mistake.